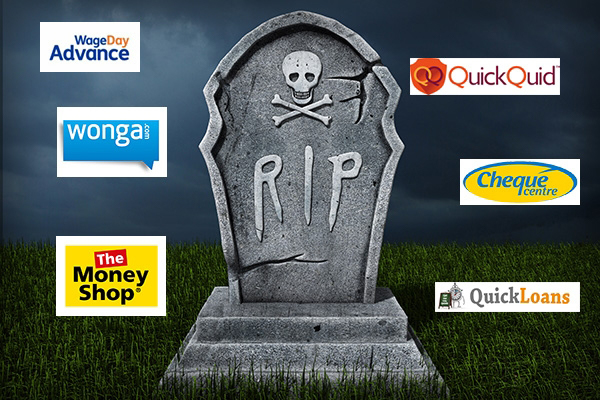 There have been some big brand casualties in the FCA's war on non-bank lenders. Here is a list of the 10 biggest lenders to fail since 2005.

Most people think that payday lending was a licence to print money, then the Financial Conduct Authority came along and went to war on Payday lending. The truth is more complicated than that. Lenders have been going out of business since 2005, before the financial crash of 2008 and before the arrival of the FCA in 2014.

This business was one of the first of the very controversial major lenders in the UK. They were basically Wonga for cars before Wonga was ever thought of. Provident Finance owned YesCarCredit; they are still active and continue to own significant finance brands today.

YesCarCredit customers were pressured into taking out very costly insurance and warranty products, often costing more than the car itself. One of those products being the now-infamous PPI. The reason for its closure was that the BBC broadcast an undercover documentary about the high-pressure sales tactics forced onto vulnerable customers. This resulted in negative PR for the business, and they decided to close their doors as customers avoided the brand.

Surprisingly the business was very profitable, even as it closed. Although they didn't really fail financially - they got out before that happened - we have included it as a trip down memory lane.

LSB was four times the size of Wonga, they were huge. They were at their height in 2007, providing subprime mortgages, subprime loans and car finance.

LSB is a great example of how the subprime market is far from a license to print money. They got it wrong by lending to the wrong people and paid the price. They ceased lending at the beginning of 2008 and went into liquidation later that year.

Ironically, we now own one of their old finance brands, "EasyLoans.co.uk".

Welcome Finance is a bit of an odd one, they first went out of business in 2009 and again in late 2019. In the mid-2000's it was one of the top 5 UK subprime lenders, it was owned by a company called Cattles.

Welcome Finance first went out of business due to accounting irregularities and the massive PPI misselling scandal. They were believed to have sold over 600,000 PPI products and were heavily targeted by claims companies in the years that followed.

Our thoughts are that they were being targeted for mis-selling loans due to not performing affordability checks on applicants. Their closure shouldn't be seen as an admittance that they did anything wrong. Lenders in the UK who deny guilt in claims are often then hit with a £650 fine per complaint to the Financial Services Ombudsman - regardless of wrongdoing. Closing down avoids the fines.

The Cheque Centre closed its high street doors in 2014. Unlike many of their online competitors, the Cheque Centre had huge overheads from running shops and staff all over the UK. They were the UK's biggest high street lender at one point. Their closure led to over 2000 people losing their jobs. They closed their physical shops as a direct result of the Payday Loan price cap that was being introduced by the FCA.

In 2016, the Cheque Centre went a step further and stopped lending online, closing for good due to the growing number of historic mis-selling loans complaints.

At one point, the business was valued at more than £300 million pounds.

Wonga was the monster of the subprime lending sector. It previously boasted of having over 1.5 million customers and was estimated to have loaned over 4 billion pounds in its lifetime. Through slick advertising, Wonga changed the whole payday lending market. It forced others to raise their game if they wanted to compete.

The business collapsed in August 2018 after Wonga received a rising number of mis-selling complaints. They didn't see the number reducing in the future and so decided to file for insolvency.

According to company accounts, Wonga didn't make a profit since the payday cap was introduced in 2015. They did, however, predict returning to profit in 2020. But this was reassessed after the number of historic complaints continued to grow, they decided that they no longer saw a path to profit and closed with the loss of hundreds of jobs.

Quick Quid followed the path of Wonga and went into administration. After the demise of Wonga in 2018, Quick Quid was the UK's biggest payday / short term lender with around 400,000 customers. At their height, QuickQuid were spending around £1.5m a month on advertising their services in the UK.

They decided to close because a number of claims companies started to target them for misselling loans. It is estimated that around 300,000 previous customers could be entitled to make complaints. With each complaint possibly costing them around the £800 mark, they would have been liable for a potential eye-watering £200m - £300.

We don't know for sure but don't be surprised to see the Quick Quid brand pop up again in a few years. It was a huge brand and still very valuable.

This lender went into administration in February 2019, throughout their time as lenders, they had 600,000 different borrowers making them a medium level payday lender.

It is not known if they cited any specific reasons for going into administration.

Whilst, not the biggest of lenders, 247MoneyBox had over 10,000 customers at the time of its collapse. Which would have put them into the bracket of being a multi-million-pound lender.

The company blamed the increasing number of historic mis-selling complaints being reported.

Piggy-Bank was a substantial force in UK subprime lending. They weren't one of the brands that customers would search for, but they did acquire a significant number of customers through their broker network. At the time of their failure, they had over 50,000 customers on their loan book. The would offer customers a minimum of £100 and a maximum of £1000 loans for a maximum of 5 months.

With the closure of Piggy-Bank, 25 jobs were lost, and customers who may have been likely to receive compensation for various issues will now miss out. At its height, Piggy-Bank was estimated to be worth in excess of £15m.

We don't see this brand ever returning to lending.

Instant Cash Loans Ltd closed in October of 2019, many of you may not have heard of them, but chances are you will have heard of their brands - PaydayUK, PaydayExpress and MoneyShop. The Money Shop was at one point the biggest UK high street lender. Like the Cheque Centre it started to close the high street shops in 2014 when the FCA announced the payday loan cap. The last shop closed in 2018.

ICL decided to close as the number of historic complaints rose to 45,000. In 2018 it decided to stop lending and instead concentrate on running down its loan book. The business finally closed down in October 2019.

ICL is in a scheme of the arrangement, which limits the amount it needs to pay out to creditors. Our bet is that the three brands will reappear in the coming years, minus its liabilities to historic loan complaints.