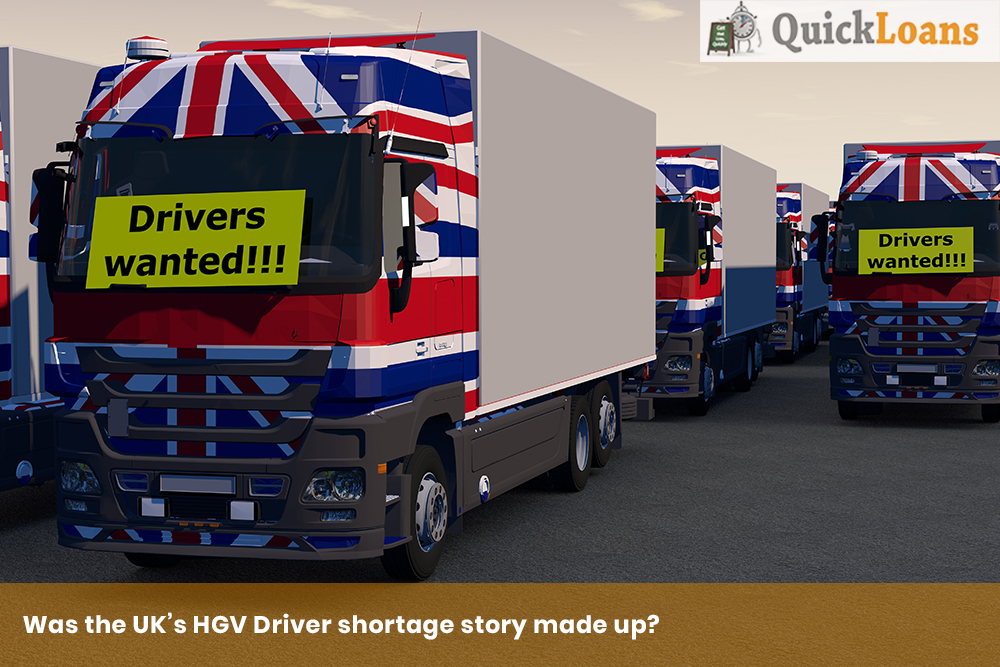 What if we told you that we could find no evidence of an HGV driver shortage? Would you believe us? This article detailing our experiences may surprise you.

Why Do People Think  There Is An Driver Shortage?

As most people will be aware, over the last six months, there have been numerous stories relating to shortages within the HGV driver industry. Most people will be mindful of this because the media has driven this issue relentlessly. To be fair, in addition to the media coverage, there does appear to be shortages of certain items on supermarket shelves.

We can conclude that there are real supply chain difficulties, but that on its own doesn't necessarily mean a shortage of HGV drivers caused them. Other than what we have heard in the media, there is still no evidence that a lack of drivers is to blame.

Supply chains are very complex. What may be the cause of shortages in one sector may not be the cause of scarcity in another. Labour shortages due to staff members self-isolating did bring a lot of temporary closures to some manufacturers. The effects of these will have caused a ripple down the supply chain.

Some businesses lost their lines of credit, meaning they had cut back production levels. Some faced higher raw material costs and declined to place orders in case prices dropped, and they were left holding expensive raw materials.

But in all honesty, the possibilities for shortages are endless. In our opinion, the case for shortages being caused by issues OTHER than a driver shortage is well founded for many manufacturers.

How do we know?

One of our sister businesses (GreyWing) invests and develops start-ups into fully functioning online brands. Two of those brands due for development are HGV.uk and HGVTraining.uk. On hearing of the shortages, our development team looked into the possibility of moving these two sites up the development schedule.

We spent over £35,000 putting together a business plan detailing how we would change the HGV industry and make bucketfuls of money. But everywhere we looked, we couldn't find a significant shortage of drivers – really! Yes, there were some isolated short-term gaps, but these were quickly filled by a slight movement of labour from another area. Freelance owner-drivers covered/were covering all the current shortages that we could find.

There were no real business opportunities in solving the HGV Driver shortage. This leads us to the question, did it ever really exist? Did some people fabricate this story for some unknown reason?

The Evidence for our findings

The first big warning sign on the HGV driver shortage narrative is the hourly rate of HGV drivers; it hasn't risen significantly. We are well aware of the stories stating that HGV drivers are now bringing in more than pilots, but this isn't true. We have not been able to find any evidence to support this or come close to supporting this.

The average hourly wage of a Class 1 HGV driver is around £13.50 an hour, and we would expect to see this around the £20 an hour level if there were such a significant shortage. For comparison, the average wage for someone starting with Amazon as a warehouse operative is £11.50 an hour, with an extra £3000 sign-on bonus. The £2.00 an hour difference for such skilled labour doesn't indicate an emergency shortage.

But there is another big sign that something doesn't smell right. Those showing the most shortages are the big players. Think about this for a second; if there were an actual shortage of drivers, those big players would be able to outbid the smaller employers. For example, Tesco's would pay £30 an hour to poach drivers from smaller transporters if there was a real crisis. Is someone saying that the shortage of Walker's crisps on the shelves for over a month is because nobody at Walker's has figured out that paying somewhere between £13.50 and £30.00 an hour will get them a driver? They'd rather have a factory sit their idle than pay someone £100 a day extra to move £100,000 worth of stock?

That doesn't seem credible to us. Something is not passing the smell test.

Whatever is going on is not down to a mass shortage of HGV Drivers. For some reason, someone somewhere is trying to scapegoat the haulage industry. As we witnessed with the so-called fuel shortages a few weeks ago, the shameful mainstream media are more than happy to cause panic to get a few more clicks. Eventually, a light was shone upon that debacle, and the press was rightly blamed for causing unnecessary. They have a history of doing this. Although we don't have a view on it,should people question the reports of a ship shortage in the car industry. Could that be being exaggerated? Maybe!

Our management team here own some great brandable website domains in the HGV sector. It would be in our interest to foster panic and drive people to our upcoming "hgvtraining.uk" website to make money from potential HGV learner drivers, but that's not what we do. Yes you can earn some decent money driving HGVs, but you won't make anywhere close to what airline pilots make, unless the wage for pilots is around £13.50 an hour.

As for what is causing the real shortages, who knows?